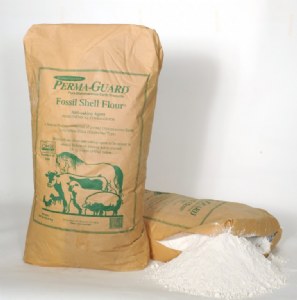 Diatomaceous earth  also known as DE, TSS, diatomite, diahydro, kieselguhr, kieselgur, celatom or celite is a naturally occurring, soft, chalk-like sedimentary rock that is easily crumbled into a fine white to off-white powder. This powder has an abrasive feel, similar to pumice powder, and is very light, due to its high porosity. The typical chemical composition of diatomaceous earth is 86% silica, 5% sodium, 3% magnesium and 2% iron.

Diatomaceous earth consists of fossilized remains of diatoms, a type of hard-shelled algae. It is used as a filtration aid, as a mild abrasive, as a mechanical insecticide, as an absorbent for liquids, as cat litter, as an activator in blood clotting studies, and as a component of dynamite. As it is also heat-resistant, it can be used as a thermal insulator.

Pest control
Diatomite is also used as an insecticide, due to its physico-sorptive properties. The fine powder absorbs lipids from the waxy outer layer of insects' exoskeletons, causing them to dehydrate. Arthropods die as a result of the water pressure deficiency, based on Fick's law of diffusion. This also works against gastropods and is commonly employed in gardening to defeat slugs. However, since slugs inhabit humid environments, efficacy is very low. It is sometimes mixed with an attractant or other additives to increase its effectiveness. Medical-grade diatomite is sometimes used to de-worm both animals and humans. It is most commonly used in lieu of boric acid, and can be used to help control and eventually eliminate a cockroach infestation. This material has wide application for insect control in grain storage.

Use in agriculture
Natural freshwater diatomaceous earth is used in agriculture for grain storage as an anti-caking agent, as well as insecticide.[2] It is approved by the US Department of Agriculture as a feed supplement.
It is also used as a neutral anthelmentic (de-wormer). Some farmers add it to their livestock and poultry feed to improve the health of animals.[3] "Food Grade Diatomaceous Earth" is widely available in agricultural feed supply stores. It is acceptable as organic feed additive for livestock.

Safety considerations
The absorbent qualities of diatomite can result in a significant drying of the hands if handled without gloves. The flux-calcined form contains a highly crystalline form of silica, resulting in sharp edges. The sharpness of this version of the material makes it dangerous to breathe and a dust mask is recommended when working with it.
The type of hazard posed by inhalation depends on the form of the silica. Crystalline silica poses a serious inhalation hazard because it can cause silicosis. Amorphous silica can cause dusty lungs, but does not carry the same degree of risk as crystalline silica. Natural or dried diatomite generally contains very low percentages of crystalline silica. Diatomite produced for pool filters is treated with high heat (calcining) and a fluxing agent (soda ash), causing the formerly amorphous silicon dioxide to assume its crystalline form.

In the United States, the crystalline silica content in the dusts is regulated by the Occupational Safety and Health Administration (OSHA), and there are guidelines for the maximum amounts allowable in the product and in the air near the breathing zone of workers.

Categories
Your Cart
Your Cart Is Empty
Information
Buy Worms!